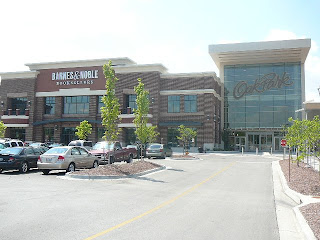 Ostensibly less mall-like but still kind of in Oak Park Mall, we found last month that B&N's Cafe is quite pleasant for a 2600 meeting. Plus they have free WiFi. We talk about random geekery, often with a freedom and privacy spin on things. Programming, telephony, security, electronics, physics and encryption are popular topics we talk about, but bring any projects or questions and we'll all have fun discussing them.

Once that's done, it's off to a nearby restaurant for food and beverages. I'm really craving Thai this month, but open to other suggestions. And there's a chance we might visit the Dumpster that occasionally bears magical things, but it hasn't been terribly fruitful lately.
Posted by Ax0n at 10:38 AM No comments:

Short version:
Greater Kansas City 2600 is no longer being held in the food court at Oak Park Mall. The next meeting (December 3rd) and all future meetings until further notice will take place in the Barnes & Noble Bookstore cafe. It's ostensibly part of Oak Park Mall, but it doesn't feel like a mall. It feels like a coffee shop inside a book store, and it's a much better environment for casual discussion and collaboration.
Long version:
I initially found out about 2600 magazine and the meetings through a few local bulletin board systems. I went to my first 2600 meeting in May of 1993, more than half my life ago. I attended infrequently until 1996, when I got my own car and finally started going regularly. As long as I can remember, there has been a 2600 meeting at Oak Park Mall food court.
Most of us were teenagers. People came. People went. Some of them even died. Many who are gone are still missed today for the friendship, inspiration and guidance they provided. Mall security chased us away once or twice. The mall got remodeled. The payphones we used to meet near went away. Memories. Lots of them.
The food court is usually a noisy and distracting place. It's easy for people to marginalize and stereotype the usual teenage food court denizens, but when this whole thing started, I was basically one of them.
At yesterday's meeting, one thing prominently stood out. The food court was different. More distracting. Louder. Taking a look around revealed the cause. Eight high-definition television sets had been strategically placed. They were playing music videos, and using the sound system in the food court to leverage a pop-music aural assault on everyone there. That was the last straw for our group. We picked our stuff up and walked to Barnes & Noble Booksellers.
Leading up to that, however, was a number of discussions I'd had with other information security folks in town. They basically refuse to show up because "Dude. It's The Mall. Come on." and I'm hoping the slight change in venue might get some more attendees as well. It doesn't fix the fact that traffic sucks in the Oak Park Mall parking lot, but it is right off I-35 and I-435 and easy to get to from most parts of town.
On top of the more relaxed venue, we have immediate access to all kinds of reading material including 2600 Magazine itself, and free Wireless Internet, you know, for FireSheeping people.
If you have thought about coming out but never have, or it's been a long time since you visited a 2600 meeting, I encourage you to give the new location a shot with us.
Posted by Ax0n at 8:29 PM No comments:

No idea what the topics of discussion will be this month. Show up. Bring projects you have been working on. Geek out.
Posted by Ax0n at 2:43 PM No comments:

There's a lot of fun stuff to discuss on Friday, including a recap of Cyber-RAID and Security B-Sides KC and a live demo of my improved Evil WiFi rig. We'll also be brainstorming for security awareness month.
Posted by Ax0n at 4:22 PM No comments:

Labor Day weekend is coming up, so things could be pretty sparse this month. I'll personally be out of town. The Great Outdoors calls to me like a siren. Aside from the short bike ride to and from the office and a few Saturday mornings spent at small, local fishing holes, I have been cooped up all summer. I plan on spending the vast majority of this weekend decompressing under the stars. If you don't have anything else going on, it's worth showing up to see who's there.  As for the rest of you, I'll see ya October 1st!

In just a few short weeks, Cyber-RAID and B-Sides KC will be happening. That's September 16th and 17th at the Downtown KC Marriott.

Cyber-RAID is a live attack and defense exercise. Cost to participate is $100. At time of writing, there are still 3 Blue Team (Defender) and 20 Red Team (Attacker) seats remaining. It's recommended that you have at least casual information security experience if you're going to sign up. Otherwise, I believe spectators will be allowed. I don't know the details on that. This exercise runs all day on September 16th and until 1pm on September 17th.

The Security B-Sides KC Conference will be happening at the same venue all day Friday. This is a highly dynamic conference where everyone is a participant, not just a face in a lecture hall. There is no cost to participate in this event. There are still slots open for discussions if you feel like leading one. If things go as planned, I'll be bringing my Evil WiFi talk.

One last bit... Deviant Ollam from TOOOL wants to come visit our local hackerspace and give a talk on Locksport (and who knows what else!) at Security B-Sides KC. He'll be staying with a CCCKC member while he's in town, but he can't afford the plane ticket out here. If you can pitch in a few dollars to help cover Deviant's airfare, contact jur1st at cowtowncomputercongress dot org.

Hope to see you there!

Details:
Cyber-RAID
BSidesKC
Posted by Ax0n at 11:37 PM No comments:

I'll personally be running just a bit late. I'd imagine there will be plenty to talk about regarding DefCon, BlackHat, and B-Sides Las Vegas. Also, we'll be discussing Cyber-RAID and B-Sides Kansas City.

I may be covering some fun Windows domain controller hacks. As usual, bring any new or fascinating research you wish to discuss. A map and meeting details in the RSS footer or on the right sidebar of http://www.kc2600.com/

The June meeting will be held at Oak Park Mall in, Overland park, ks from 5pm to 7pm.
Topics: Netbooks, Defcon planning and omgwtfbbq.
Posted by Joel Kershner at 4:53 PM No comments:

As usual, map links and specifics on location are in the RSS footer and the right-side of www.kc2600.com

Also, Kenton, one of the frequent 2600 attendees, will be giving a presentation at CCCKC on April 12th at 7:00 PM. He'll be discussing his Doctorate thesis work on DNS shenanigans, and I believe he'll also cover techniques to help make DNS tunneling more stealthy.

Sorry for the late notice. March's Greater KC 2600 meeting is tomorrow at 5:00 PM. See the sidebar on our site or this posts's footer for map and details.
Posted by Ax0n at 8:19 PM No comments:

Sorry for the late announcement. Frogman, Asmo and I just talked about it at the weekly CCCKC meeting, and that reminded me to post. Meeting location, map, etc. can be found in the RSS footer or the sidebar on the right, depending on how you're reading this post.